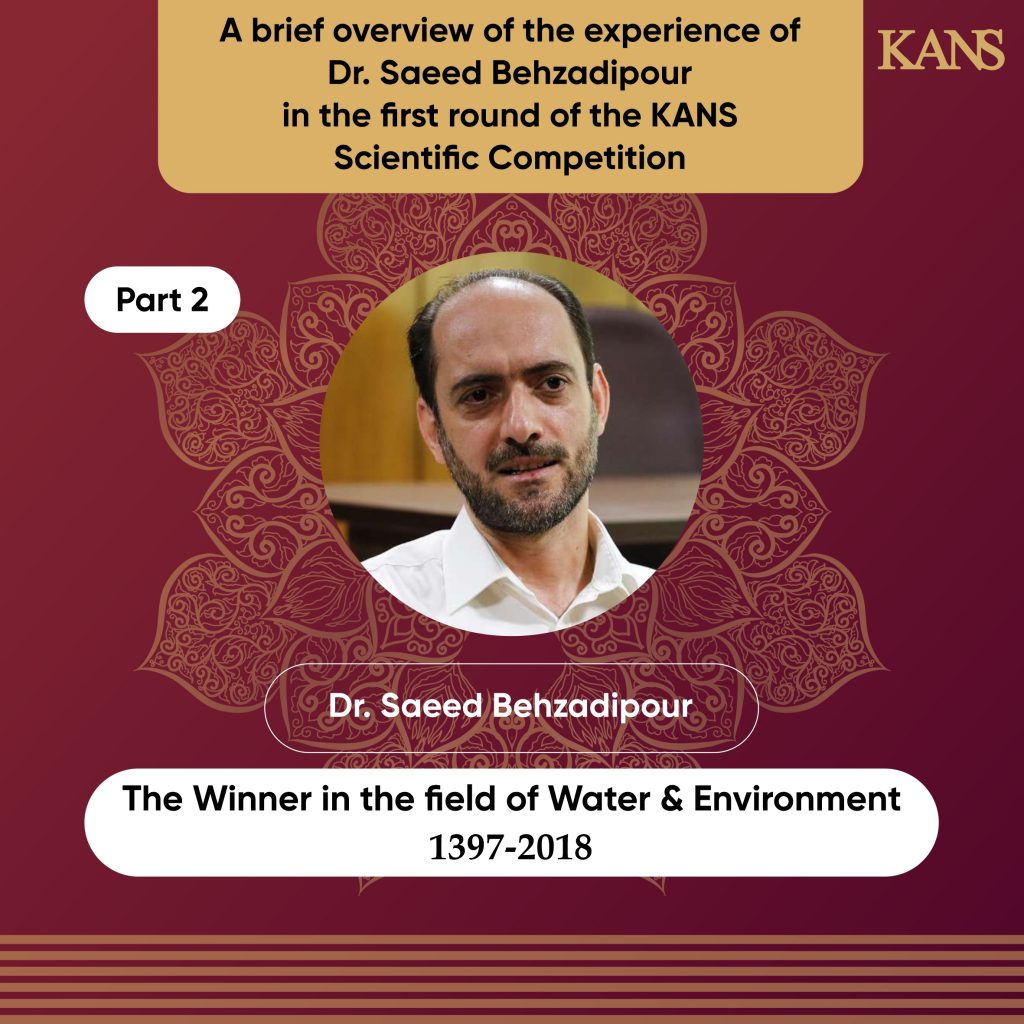 A brief overview of the experience of Dr. Saeed Behzadipour (Second Part)

Dr. Saeed Behzadipour is a PhD graduate of the University of Waterloo, Canada and a member of the faculty of the Mechanical Engineers at Sharif University of Technology. The Secretariat of the Second KANS Scientific Competition has conducted a brief overview of their scientific and educational experiences in friendly and informal interviews, and has specifically asked questions about the product presented at the first KANS Scientific Competition. The following is the text of the second part of this interview.

One of the challenges we faced during technology development was the investor debate. Investing in high-tech technologies in Iran is a new issue and investors are very cautious. In this topic, there is a possibility of failure and at the same time the return on investment is not clear. The experiences of such investments in the country are small and investors usually have similar expectations of investing in normal commercial and industrial activities. This topic made us have some difficulties with the investor and we had to be constantly negotiating. The robot was expected to sell out soon and recoup its costs. Even we did not have a thorough assessment at first and made very optimistic promises to the investor. We thought we could bring the company to financial independence in 2-3 years, but to this day, six years after the start of the investment, the project has not been able to achieve full financial independence. Of course, the investor is still hopeful and hasn’t stopped supporting the team.

Of course, we are not the only ones facing this challenge. An American company, which is the most important producer of such products in the world, entered the stock market 7 years ago and has been attracting capital all this time and is still losing money. But investors are very optimistic about the future of this product and therefore do not withdraw their capital from the company.

At present, this product is controlled by the operators available to the disabled person and it has no connection to the disabled nervous system. Basically, the relationship between the human nervous systems and machine is a topic that is still being pursued at the laboratory level and doesn’t seem to be commercially available in the short term.

The status of this device in the world

This product was first traded in the world in 2014 by an Israeli company, which was later purchased by an American company. Apart from this company, there are two other American companies in this field. One of them is mostly aimed at therapeutic-rehabilitation and the other is aimed at selling the final product to the disabled. In addition to the United States, companies in Russia, Brazil and China are working on the product. A total of 3 companies have succeeded in commercializing this product, which they offer to the market at very high prices. For example, the price of a similar sample of our product by one of these companies is $ 70,000.

Although this product is very new, we are not far from the world stage. This distance in the current situation may be about 4 years, but if we continue with the same pace, it may gradually increase. The distance is not due to scientific issues and there are good forces in the field of biomechanics and robotics in the country. The main issue is investment. Of course, with a little capital we can achieve the same result, but it will take a very long time. For example, similar foreign models of the Exoped robot have been invested in several million dollars, but we reached the “Exoped” with a tenth of the capital.

Since we were unfamiliar with the method of judging in the “KANS” competition, we prepared a presentation that was very scientific, in which we described two of the technology knots we had solved. One of the knots was how to attach the rigid rods to the moving body so as not to injure the body, and the second was how a powered orthosis with a limited motion could guide a person taking steps safely. We showed the solution to these two problems in the video we made. Being selected in the first round of the “KANS” Scientific Competition in the health sector was both unexpected and encouraging for us; We were especially pleased to be able to prove to the judges that we had localized such sophisticated technology.

An interesting point we saw in the “KANS” competition that motivated us to participate was its promotional orientation in the community. This promotion of our product would help people become familiar with the technology and reduce consumer concerns. Of course, we believe that “KANS” rivalry is still a long way from achieving such a function, and that it may reach it slowly in later periods. In my opinion, if one searches for the term “KANS” competition on the Internet, one should easily get information about the selected designs, but this is was not possible at the moment. It is better for the Mustafa (PBUH) Foundation to follow the selected technologies in order to reap the fruits that have been introduced to the society through this competition and to be used by the people.

“Exoped” personal version has not been commercially available in the country yet. This is not a product that can be bought and delivered to the patient and just leave him with it. This device requires one month of intensive training, it is similar to cycling and one must learn how to use it. It is possible that after a month the result will be that the person cannot use the device. For example, one of his needs is to have strong hands and to be able to stand with a cane. Despite all this, to this day, 4 copies of this product from two different generations have been sold for clinical use. Of course, we are one generation ahead of the last sale. Hopefully, as we move forward, we will be able to bring more of this device to the community so that both the “Pedasys” business will survive and with this robot more people will be able to stand on their own feet after years of wheelchair use and overcome some of their limitations. But we are still in the stage of clinical studies and review of the device and we are far from being a product that can be given to the patient instead of a wheelchair.