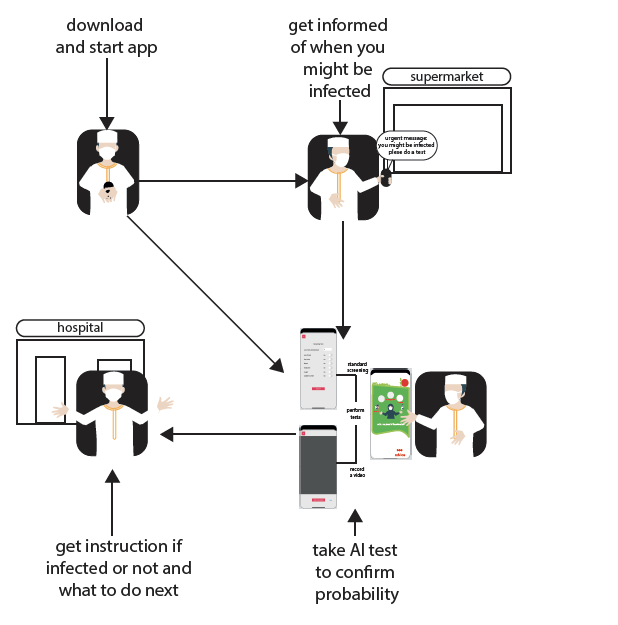 They are tracking COVID-19

Sultan Qaboos University Hospital (SQUH), Medical Research Centre at Sultan Qaboos University (MRC-SQU) and the Omani company (TAQAT LLC) are collaborating to deploy an Artificial Intelligence (AI)application with efficient isolation model through – trace, test and to help on mitigating the impact of COVID-19. Currently they built the system and in experimental research level and hope to publish the findings soon. We hope that the results will be effective, reliable, usable and ground-breaking

Many governments have decided to combat the virus with technology, namely contact tracing apps. However, these apps have proven either inefficient/ineffective or an intrusion to privacy. It has been widely explained that the effectiveness of tracing apps is very low at best and mainly due to twoissues:

1. Inaccuracy of the signal

2. The virus ability to indirectly infect

The inaccuracy of the signal is much discussed subject as GPS has approximately 5m accuracy at best and worst when in doors where it will not be able to read its location at all. To overcome this issue Bluetooth is touted to be the saviour, albeit it being plagued with similar issues, mainly distance and direction. Apple and Google have joined up to reduce the impact of these issues especially the interoperability and with that they have done a good job, but these inaccuracies still exist albeit largely reduced.  However, privacy issues persist.

Privacy issues are currently seen to be a bigger plague than COVID-19 itself. Norwegian tracing app has already been pulled off and many other to follow suite. Even though effort to use decentralised mechanism introduced by the collaboration of Apple and Google the fear still remains as a simple accident or a malicious hacking attempt can cause an unprecedented effect to the users.

We are proposing an approach of using AI based infection detection coupled with early warnings forpossibility of getting exposed. Since we don’t need user information ours is the only concept where users are not stored at all to a centralised system server. The idea is that user marks a location anonymously. The location is identified and using reinforced learning AI we identify the possible length the location should keep the mark. Any user who is about to enter the location is given instructions on how to protect themselves when going into the marked location to themselves using the app AI for the next four days. If they test positive, they are given an appointment to visit a testing centre. It is anticipated most people will follow protocols and the advice given since it is very convenient, is easy to perform and especially most people will not want to expose themselves to unnecessary risk. This should reduce the number of infection quick.

Our system is designed to cast a wide net and ask the users of whom most might be false positive to use AI based testing system and reduce the cohort by over 80% so to increase the accuracy of prediction.

Our concept uses existing published researches and tools for initial analysis like the test of dry and wet cough similar for testing the COVID-19 using temperature. These have been proven to be very efficient on the specific task (namely cough and temperature) but since these symptoms can be caused by other diseases, they become very low in accuracy of the prediction of COVID-19. We have created our own AI algorithms that we believe if combined together with these methods can increase accuracy to satisfiable level.

The AI and software side is completed, and our current Objective is to test the concept with clinical data and see the efficacy.