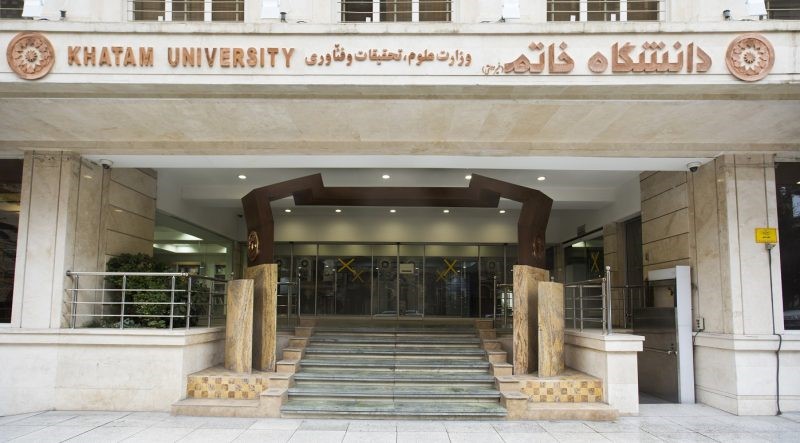 Khatam University was registered under the name of Khatam Institute of Higher Education on 11/20/1375 by a group of experienced professors of Sharif University of Technology and officially starting admitting students on February 1997 with four master’s degrees until 2006. After a five year break in student admission, it re-admitted students in 2012 with the support of Pasargad Bank and with a new approach. In 2015, based on quantitative and qualitative expansion of educational and research activities of the university, and employment of new faculties in various fields, the Khatam Institute of Higher Education is officially elevated to Khatam University. At present, the university has three faculties, including fifteen departments and fifty disciplines, and it is graded at the highest level of educational institutions and non-governmental universities in Iran.

Khatam University is equipped with advanced and modern facilities such as a large digital library, and a library with about 12,000 volumes of Persian books and 5,000 volumes of English. The advanced language teaching laboratory and computer site of the university, along with other facilities and services, has provided students and scholars with the state of the art facilities. In addition, there are other laboratories such as Internet of Things laboratory, electrical engineering laboratory, blockchain laboratory, network and cloud computing laboratory, artificial intelligence and robotics laboratory and financial risk laboratory has provided opportunity for research in various fields in the university. In addition, the international examinations center of Khatam University conducts TOFEL and GRE examinations at the university. Educational spaces and classrooms at Khatam University have the highest quality and contain the most up-to-date equipment.

Research activities in Khatam University are widely developed at the theoretical and practical levels. At the theoretical level, over 1000 articles have been published in prestigious domestic and international journals and conferences with the university affiliation. Also, various national and international training courses and workshops are held in the university. Launching an educational-research laboratory for industrial automation and cyber security of industrial networks for the first time in Iran, launching a center for artificial intelligence and robotics for robot construction projects, launching a center for applied research in electrical engineering are part of the research activity at the Khatam University. Researchers at Khatam University launched a humanoid robot to provide banking services and developed humanoid robot software (Pasar), which won the first position in Robocup 2021 in the Standard Platform section.  Also a patent titled “production line automation device for detecting the accuracy of car ECU software based on computer vision” is one of the achievements of applied research at Khatam University. Furthermore, a high percentage of the master’s degree students of this university have succeeded in receiving admission and continuing their doctoral studies in prestigious domestic and foreign universities.

All the plans and services of Khatam University are in line with advancing the long-term goals of the society and improving the level of scientific and practical knowledge of students and researchers in various field, and no effort will be spared in this direction.